Best Towns in the French Riviera 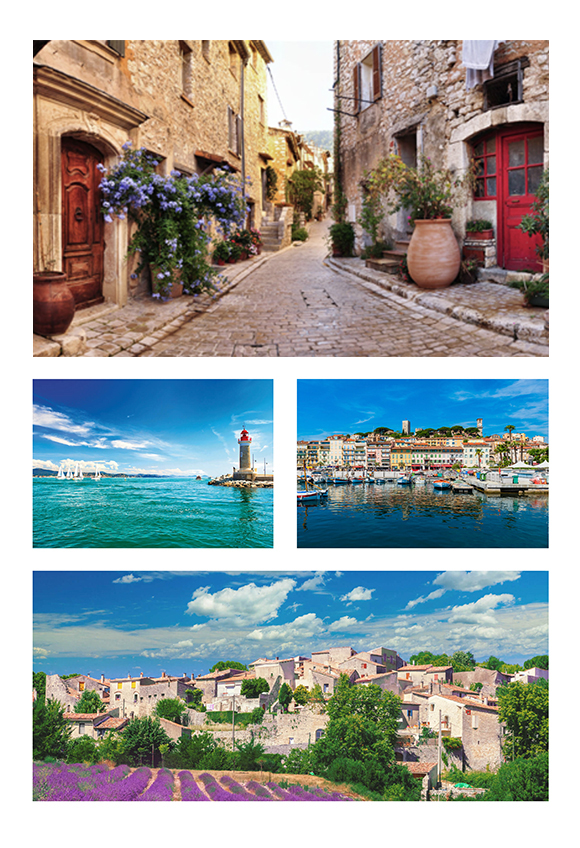 The French Riviera is a coastal region in southeastern France nestled along the Mediterranean Sea. While cities and towns in the Riviera exhibit French culture, cuisine and lifestyle in their own specific way, it’s the beautiful beaches, fields of lavender, and rugged, mountainous terrain that make this region such an intriguing juxtaposition to Paris and many other French cities — and one of France’s most popular travel destinations, especially in the summer.

NICE
Although the borders of the French Riviera aren’t rigidly defined, the largest town in the area colloquially known as the Côte d'Azur (Azure Coast) is Nice. With everything from a sprawling, miles-long seafront promenade (Promenade des Anglais), to the types of small and winding side streets lined with cafés synonymous with nostalgic French paintings and postcards, Nice really is the most dynamic city in the region. Not part of France until the Treaty of Turin in 1860, Nice has a strikingly Italian feel to much of its architecture as well. To sate the art snob in everyone, there’s Musée Marc Chagall, a museum featuring many of the famed painter’s works inspired by the Riviera region itself. Not only does the museum feature several of Chagall’s most beautiful works, the design and development of the museum was heavily influenced and directed by the artist during his lifetime.

SAINT TROPEZ
Unlike that of Nice, Saint Tropez’s population is only around 4,300 people, meaning it’s much more of a small fishing village — albeit a very chic, world-famous one — than a densely populated city. This smaller size and population make the beaches here somewhat more relaxed than other more populated cities. That being said, Saint Tropez is still a popular destination, so expect the stunningly beautiful beaches to be busy in June, July and August. For a break from the beach, venture upward to the Citadel. Featuring a maritime museum exploring the fortress’ rich history of Saint Tropez and the coast surrounding it, the Citadel’s perched position also provides visitors with some of the best views of the city below.

CANNES
Yes — Cannes is so much more than just the infamous, celebrity-studded film festival. One of the best activities in Cannes is to visit Îles de Lérins, four islands that are just a 15-minute ferry ride from the mainland. Here you can find fantastic beaches and bays that provide the type of seafront experience hard to find anywhere else in the world. Within the city there are several attractions as well like the Casino Croisette, the most popular casino in all of France. There’s also Rue Meynadier, a picturesque boutique and café-lined street full of everything that makes France, well, France. And of course, Cannes is most well-known for its aforementioned, eponymous springtime film festival — for good reason. It’s a star-studded bucket-list experience you have to see to believe.

GRASSE
Located just inland from Cannes, Grasse is definitely worth the stop. Endless fields of breathtaking lavender make it one of the French Riviera’s — and all of Europe’s — most stunning spectacles. If the fields alone aren’t enough for your olfactory senses, maybe the world-famous perfumeries in Grasse will be. Often considered the perfume capital of the world, perfumeries such as Galimard, Molinard and Fragonard offer free tours showing guests just what goes into making their world-renowned fragrances. If you’re in town in early August, it’ll be hard to miss Fête du Jasmin, a yearly festival celebrating jasmine that fills the streets with floats, folk music, food, dancers and more.

MONACO
While not actually part of France, Monaco — the world’s second-smallest country — is one of the French Riviera’s most mesmerizing areas. The Palais du Prince sits balanced upon a ridge high above the rest of the country, giving visitors jaw-dropping panoramas of the small principality below. Given that the prince is not home (he’s often traveling the world for vacation or diplomatic reasons), when you’re done taking in the scenery you can also tour the palace, which is home to some of the most extravagant architecture and design in Europe. Another major attraction — the Monte Carlo Casino — is similarly decadent, having hosted big spenders from around the world for over 100 years. With a marble atrium, onyx columns and numerous pieces of exquisite art, it’s not just one of the most famous and luxurious casinos in the world — it’s also a cultural and architectural treasure. Tucked along the Mediterranean coast like several other Riviera hotspots, Monte Carlo is also a popular cruise destination.

Be sure to read Current regularly to stay up-to-date with the latest news and stories from around the world. Current’s articles are brimming with timely and descriptive details to stimulate your imagination and destination tips to create excitement as you dream of your next Seabourn voyage.