Exploring the Ancient City of Ephesus 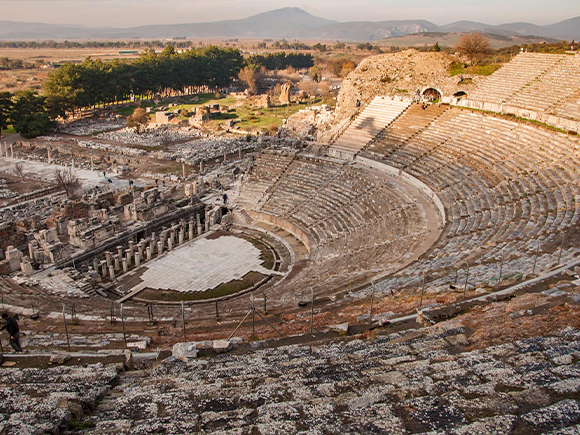 One of the ancient world's most important trade centers and religious cradles is a thriving destination for international travelers today.

With a city as historical as Ephesus in modern-day Turkey, the word "nostalgic" doesn't necessarily do it justice. Nostalgia implies a sense of lost youth or times in one's own life that one deems happy or worthy of reminiscence. Ironically, youth is far from the word you would use to describe a city such as Ephesus. Turkey as a whole is a place that is as deeply entrenched in ancient culture as almost anywhere in the world. One of the biggest cities in the eastern Roman Empire, Ephesus, a UNESCO World Heritage Site, is a must-see for those who love history.

Selçuk Before diving into the ancient ruins of Ephesus, it might be worth discussing the modern city they're based in, Selçuk. This small traditional city is steeped in ancient relics that are the stepping stones of Christian culture, one of which being the ancient ruins of Ephesus itself. Not being a hotbed for more "youthful" or more or less decadent tourism, the history alone in Selçuk far outweighs any price tag on a Michelin star restaurant or heart-pumping nightclub you could find in other Mediterranean getaways.

Temple of Artemis It would be without question that a story about exploring Ephesus in Turkey would naturally include the Temple of Artemis as the top destination. The Temple of Artemis is about four times the size of the almost more popularized Parthenon in Athens, Greece. To be transparent, most of the actual original temple resides in a British museum since several reconstructions have occurred because the original structure has been destroyed on account of several natural and human factors over several centuries. Nevertheless, being only a couple miles from the heart of Ephesus, the Temple of Artemis is something you should not miss if you're in the area.

Library of Celsus Built in 117 A.D., the Library of Celsus is one of the most memorable images travelers have after visiting the ancient ruins of Ephesus. Formerly home to over 12,000 scrolls and texts, it was one of the largest and most comprehensive libraries of the ancient era. If you look up the ancient ruins of Ephesus, chances are the old pillared façade of this library would be one of the first images that would come up. The library was commissioned by Gaius Julius Aquila in 114 A.D. to honor his father, Tiberius Julius Celsus Polemaeanus — hence the name. Tiberius Julius Celsus Polemaeanus was buried in a lead tomb encased in a marble sarcophagus beneath the structure, thus rendering the library not just a place for scrolls and texts, but also a beautiful mausoleum.

The Terrace Houses Once home to the rich and aristocratic residents of Ephesus, the terrace houses are now an excavation site that provides a beautifully historic look into what life once was for the high and mighty in a once-powerful Greek city. Touring the city via the walkway above the terrace houses provide amazing views of frescoes and mosaics featuring animals, gladiators, and even the prices of various market goods. Taking the tour is just one of the many amazing experiences when you visit Ephesus.

Basilica of St. John The fact that the Basilica of St. John barely resembles its once-mighty state is only more testament to how much history, pillaging and conquest it has seen throughout its history. St. John is said to have brought the Virgin Mary here from Jerusalem before his remaining years, where he wrote his gospel before, eventually, being buried in his tomb underneath the basilica.