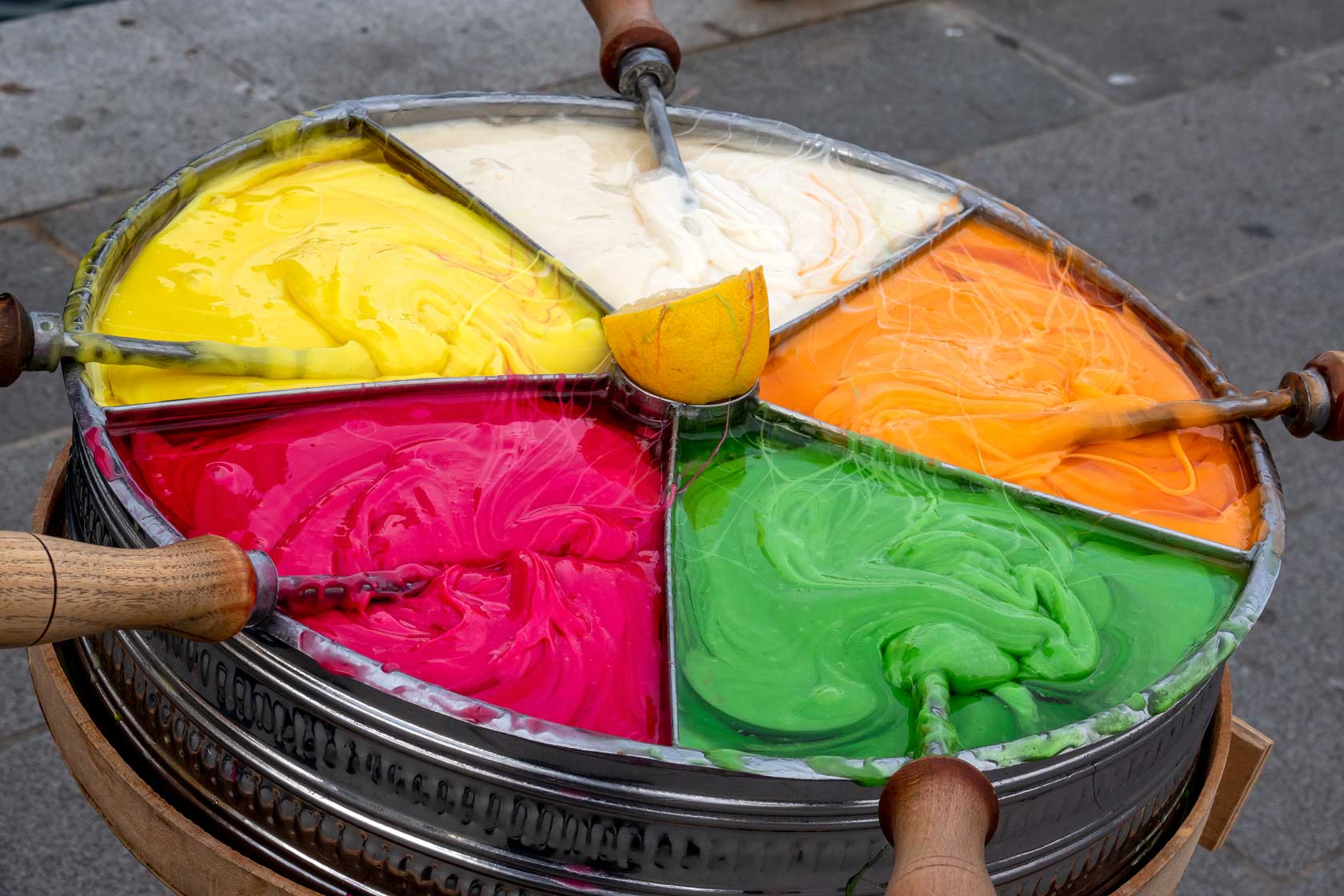 For centuries, Turkey, now officially known as Türkiye, has acted as a bridge between East and West, combining influences from Europe, the Caucasus — the region between the Black Sea and the Caspian Sea — and the Middle East. Its largest city, Istanbul, is even located at a literal crossroads: this ancient megalopolis, known until 1930 as Constantinople, sits in both Europe and Asia, with the narrow Bosporus Strait separating the Black Sea from the Sea of Marmara. Naturally, these roots are all reflected in Turkish cuisine, which incorporates vibrant flavors, superb local produce and sophisticated techniques. Just like Singapore, Hong Kong or Mexico City, Istanbul ranks as one of the great capitals of street food, but cities around the country offer a bounty of delights.

Surf...
Dolma refers to a vessel, usually a vegetable, that has been stuffed with a variety of fillings; it is a familiar dish in this part of the Mediterranean — you may know the Greek dolma as stuffed grape leaves, for example. A Turkish favorite is midye dolma, in which mussels are filled with a mixture usually involving a rice base. When ordering, be sure to tell the street vendor how few or how many mussels you want, so you’re not committing to a big platter if you only want a taste. Do as Turks do and squeeze a splash of lemon.

If you prefer fish, Balık ekmek is a sandwich where peppers, onions and, yes, a squeeze of lemon enhance a piece of grilled or pan-fried mackerel. This popular and tasty street food is commonly sold near the Bosporus, especially in Istanbul’s Eminönü and Karaköy neighborhoods.

...and turf
If one Turkish specialty has crossed borders, it’s kebabs (or kebap, meaning something that has been grilled). You can find a dizzying array of variations, including the famous döner kebap, which is traditionally made with lamb (you can also get beef or chicken) roasted on a rotating vertical skewer; adana kebap, spicy minced meat; and durum kebab, a wrap using lavash flat bread. Vegetarians may prefer kestane kebap made from chestnuts, which are a wildly popular seasonal snack during autumn and winter.

Türkiye also puts delicious spins on sandwiches. Islak burger is steamed until the bun and meat meld into a delicious soft mass — the name roughly means “wet burger,” referring to its consistency. Kokoreç, on the other hand, might be a bit more of an acquired taste as this delicacy consists of sheep intestines grilled then stuffed into bread. Kokoreç is favored before and after sporting games, but don't worry, you won’t have to trek to stadiums to find this sandwich — it can be found at many street kiosks around the country.

Elevating flour and water to new heights
Variations on baked dough are used to lift several street-food items all over Türkiye. Looking like a small bready ring and usually encrusted with sesame seeds, simit might well be the one staple everybody in the country can agree on. It can be eaten plain as a quick snack; with a side of feta, tomatoes or cucumbers; or with savory fillings like olives, sausage or cheese. Simit is popular at breakfast but really, it’s an anytime treat.

Every country seems to have a variation of pizza, and Türkiye has at least two that stand out that you should try. Pide, shaped like a little boat and stuffed with goodies that often include a healthy amount of cheese and lahmacun which looks like a very thin pizza and is usually served with seasoned ground lamb or beef. A touch of parsley on top and voilà: you have a portable meal.

Meanwhile, gözleme is essentially the local crepe: a thin pancake griddled and stuffed with usually savory fillings like cheese, spinach or mushrooms. Make sure you also try the crispier version, börek, which involves phyllo pastry filled with cheese, spinach, ground meat or vegetables, and is usually eaten in the morning or for lunch.

One potato to rule them all
The baked potato reaches new heights in kumpir, in which this humble but much-loved root vegetable is stuffed with a dizzying variety of toppings, including cheese, sausage, red cabbage, corn and more — many places let you choose from a wide selection from a salad bar.

Time for treats
A sweet treat turns into a show when vendors offer Maraş dondurma, ice cream that is given a stretchy consistency by the use of the orchid bulb salep, or sometimes mastic (a kind of resin that is also commonly used in Greece). It is named after the city of Maras, now known as Marash, and pistachio is a particularly popular flavor.

Also making for a vivid experience is macun, a type of brightly colored sweet that resembles toffee and can be wrapped around a stick to create a kind of lollipop. Some versions (mesir macunu) can have a surprising little kick thanks to the use of herbs and spices. The treat is so popular that UNESCO has included a mesir macunu festival in Türkiye on its list of the intangible cultural heritage of humanity.

And if you find yourself flagging after a day of exploration, try kahve, Turkish-style coffee made with very finely ground beans and sugar that are brought to a boil in a special pot made of brass or copper. An indication that your coffee has been properly made: there should be a healthy head of foam.

Türkiye, and Istanbul in particular, is a favorite destination for travelers and you can see why while wandering its streets and exploring its neighborhoods: Few cities in the world embody the sweep of history and the diversity of cultures in such a vivid manner. What better way to experience them than by tasting your way through Türkiye on an ultra-luxury Seabourn voyage.